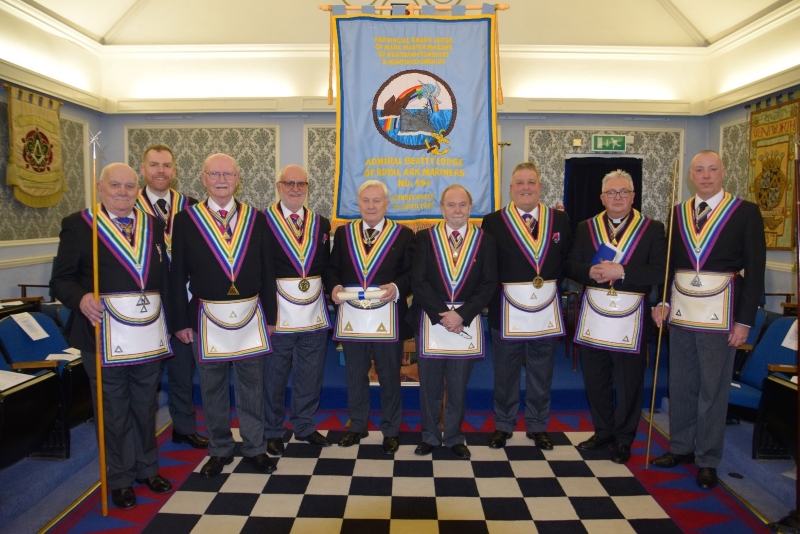 Admiral Beatty Lodge of Royal Ark Mariners No. 594
Celebrates its Centenary with a Banner Dedication Ceremony

Right Worshipful Brother John Herbert Prizeman, Deputy Grand Master (centre left, holding the Centenary Warrant), was delighted to make a visit to Wellingborough Masonic Hall on Thursday 3 May 2018; to take the Chair and preside over the celebration of the Lodge’s Centenary.

Following this he handed the gavel to Right Worshipful Brother Robert Andrew Stokes, Provincial Grand Master for Northamptonshire and Huntingdonshire (3rd from right), who led the Banner Dedication Ceremony.

A full, informative and entertaining history of the Lodge was delivered by the Worshipful Commander, David Snape, R.A.M.G.R. (centre right), which was followed by an equally captivating Oration from Worshipful Brother Reverend Tony Avery, R.A.M.G.R. (2nd from right).

In-line with the nautical connection of the Royal Ark Mariner Degree, the Lodge is named after one of the important naval figures of the day: Admiral Sir David Beatty, who had been appointed First Sea Lord in November 1916. It was Beatty’s part in the battle of Jutland in 1916 which cemented his reputation in the British psyche.

After the meeting closed the Brethren retired to dinner which included fabulous roast beef joints carved at the dining table, echoing the serving of the beef 100 years ago at the Consecration meeting in 1918.