The current Ancient and Masonic Order of the Scarlet Cord is based on an earlier Order, The Royal Order of Knights of the Scarlet Cord, developed in the British Isles in 1889, which was itself derived from 18th Century documents from the Amsterdam Masonic archives.

The rituals and ceremonies were rewritten and enriched by His Honour Judge Fredrick Adolphus Philbrick, KC, and were performed as appendant grades to the Order of the Secret Monitor. The rituals of the Order are taken from Old Testament times, commencing at the period of Joshua, the fall of Jericho and the story of Rahab. The main purpose was to raise considerable sums of money for the Secret Monitor Benevolent Fund, which still plays a significant role in Masonic welfare provision today. The Order ceased working in 1929.

A paper on the original Order written and delivered in 2001 by Peter Glyn Williams, the then Grand Supreme Ruler of the Secret Monitor, stimulated interest in the long-forgotten rituals. In 2006 a Secret Monitor Conclave was Consecrated with the sole purpose of reviving the old Order and conferring updated versions of the original six grades, some of which only remained in fragmented form. A huge appetite for the grades among Secret Monitors led to the Order being inaugurated as a separate Sovereign body in a magnificent ceremony in the Grand Temple at Freemasons’ Hall on 21 July 2010.

Address of the Grand Summus
M.Dist.Comp. Ian S. Currans
Annual Grand Senatus of the Order of the Scarlet Cord
Thursday, 2 May 2019 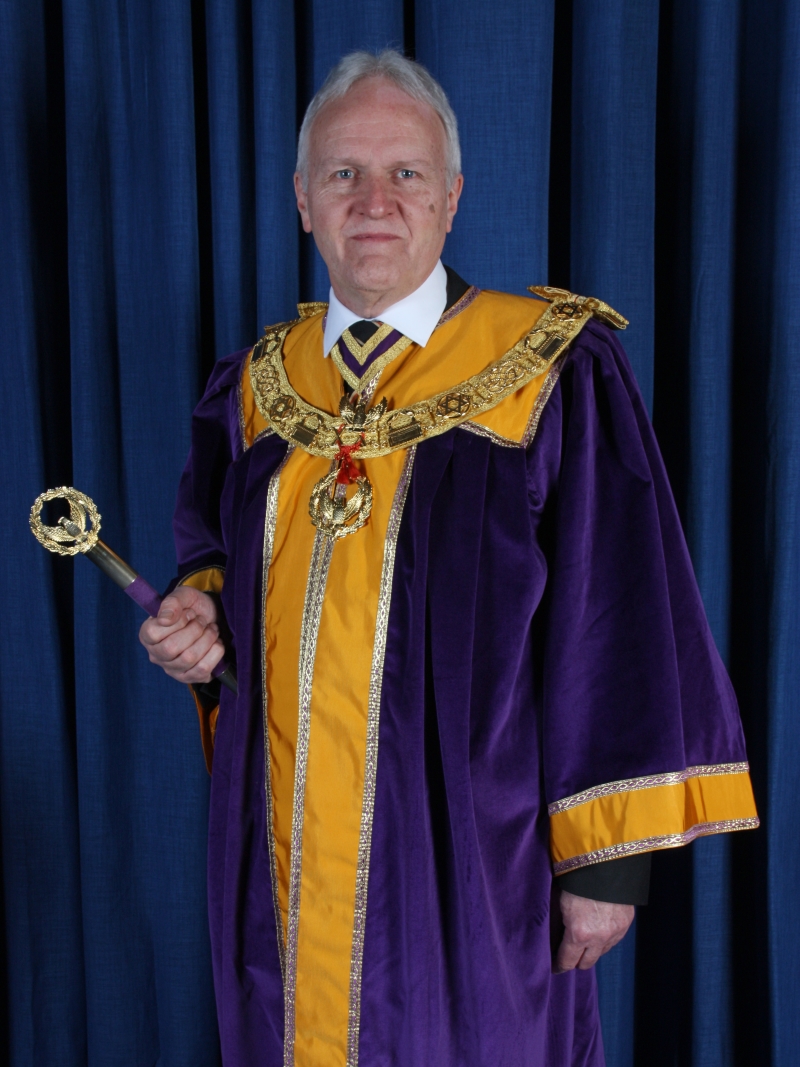 Companions, welcome once again to Grand Senatus. You have arrived in huge numbers and I am grateful to each and every one of you for your presence and support. This attendance reflects the great enthusiasm for our Order amongst the Companions - an Order which has enjoyed a 5% increase in memberships over the past year and sees us past the 3000 mark for the first time. Looking around the Grand Temple now, it seems most of those are here this afternoon! Well done everybody. But there is no room for resting on our laurels Companions - we still have an enormous amount to do in converting Secret Monitors into Scarlet Cord Masons and many areas of the country and indeed the world where we should be looking to make the Scarlet Cord available locally- obviating the need for potential members to make long journeys in order to join. We should also be considering giving wider options for start times to meet the needs of those who work and Saturday morning or afternoon Consistories for a similar reason.

At the forefront of our Companions considering these things should be those invested with Grand Rank appointments and promotions today and those who took a higher Grade yesterday. I congratulate them all on a very well deserved elevation in status but remind them that those dreadful "C words" - complacency and consolidation - should not be in their vocabulary. I am asking you to get out there, talking enthusiastically about our Order amongst your masonic friends - no matter if they are not yet Secret Monitors, you can fix that first. And I am asking you to set the bar even higher in your Consistories, Provinces, and Districts, whether in terms of attendance, administration, or ritual.

My first year as Grand Summus has simply flown by. I’ve made a number of private visits to Consistories and Provincial meetings and enjoyed them all. But the year has been illuminated by a number of big events which I must tell you about.

Last August, I travelled with a team of senior Grand Officers to Chennai in India, to confer the 5th Grade of our Order. The Scarlet Cord is extremely popular in India, yet we had only 5 holders of the Grade over there, so it was important to go and do something about that. We were received with the greatest warmth (literally) and hospitality- I am very grateful to our hosts and to the team, who performed brilliantly.

In September we were in Lugano in Switzerland for the Consecration of Le Cordon Ecarlate du Léman Consistory, our first Scarlet Cord unit in that country, another visit highlighted by beautiful weather and generous hospitality.

In October, we were back here for the Consecration of Metropolitan Consistory, which will be meeting after office hours and in consequence has a long list of younger candidates awaiting entry.

November saw us in Southend for the Consecration of Ceolmaers Ford Consistory, which meets weekday mornings at Chelmsford.

And In March, we consecrated the Shropshire Union Consistory at Wolverhampton, which is our first Consistory in that County, filling in another blank on the map.

I have also installed 3 new Provincial Grand Summi and I’ll ask them to stand and be recognised. Right Distinguished Companion Michael Jacques, Durham and Northumberland, taking over from Bob Henderson.

And Right Distinguished Companion Philip Clare in Kent, who has replaced Lew Finnis. We wish them well in their news posts and thank Bob and Lew for their terms of office.

And what of the coming year?

Well, it promises to be even busier Companions. On May 20th we shall be on Guernsey, for the consecration of Guernsey Lilly Consistory, the second Consistory in the Channel Islands. In late July I’ll be flying a little further east to Singapore, to install Derek Lo as District Grand Summus for South East Asia in succession to Vincent Tang, who is finishing a wonderful nine year spell in charge as Grand Inspector and then District Grand Summus. On the way back, I’ll be installing the new District Grand Summus for Southern India- delighted to formally announce it’s to be Krishnamachari Gopal - on the retirement of "Mr India", Madhavan Chellappa, whose contribution to the development of our Order in that country has been simply outstanding. Another iconic figure in India is also retiring, Right Distinguished Companion Shums Merchant, District Grand Summus for Western India, who has been just as dynamic in his efforts for the Scarlet Cord. Shums was planning to be here today, his first ever trip to England, but a health issue has, sadly, prevented him from coming. Stephen Hindes is going to be our new leader there and my second stop-off will be at Mumbai to Install him.

These are the events inked in the diary, but I am aware of several other Consecrations in various stages of planning - in the Chilterns, Surrey, Devon, South Wales, Midland Counties, the Canary Islands, Switzerland, and at least three in India. I’m also excited to learn of the possible re-birth of the Order in France, where our District has been in abeyance since 2012.

So there is much to look out for Companions- so can I urge you to keep up-to-date by looking regularly at the Mark Masons Hall website and our Facebook page, which keeps us in touch with everything that is going on here at home and overseas and has contributed greatly to some mega-attendances.

Talking of mega-attendances, let me now introduce to you a number of Heads of other Orders and overseas visitors who are with us today…

Companions, the Order is thriving and for that I must thank many people; at Consistory level, the Recorders, D.C.s, Treasurers, and recruiting sergeants; and at Provincial and District level, our Summi (most of whom are here today) and their executive officers. I must also thank this past year’s Grand Team, who have been magnificent, and my Tzaddikim, whose dedication to my personal safely is amazing - one of them even refuses to leave my house!

I thank especially the Grand Recorder for his advice, support and patience. Some background information here, some guidance there. His 4th floor team have once again worked so hard to make today happen, the Grand Watchman and his team have shoe-horned everyone in and the Grand Director of Ceremonies and his team have ensured our ceremonial is faultless.

But most of all Companions, I thank you all….. for coming today, your support over the past year and your personal friendships with me. Looking around the Grand Temple I can see you have all enjoyed yourselves and that means I have done my job.