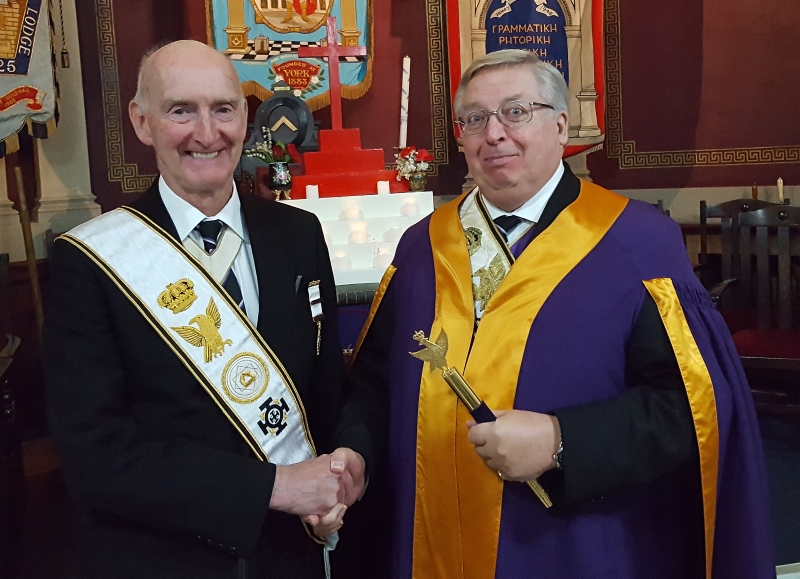 Peter Ronald Shuker was installed into Eboracum Conclave No 137 on 5th October 1968 and became Most Puissant Sovereign in 1977.

Having held Divisional Rank of Deputy Marshal, Peter was appointed Deputy Intendant General in 1993 at the same meeting that George Alfred Cooper was installed as the Intendant General and retained this position until 1996.

Peter’s Grand Rank appointments started with the rank of PG Prefect in 1984, PG Chamberlain in 1989 and finally Grand High Chancellor in 1996.

In his personal life, Peter qualified as a structural engineer working for Dorman Long on Teeside before moving into training and education achieving senior positions in higher education. This was recognised by the award of the OBE in 2002 which was presented to him by the Prince of Wales.

Following National service in the Army, he later served for thirty years in the Army Emergency Reserve and received the Territorial Decoration (TD) medal.

Peter received his 50 year certificate and jewel from the Intendant General, R.Ill.Kt. David John Roach, at the regular meeting of Eboracum Conclave on Saturday, 6 October 2018. There was a good turnout of members and Divisional Officers and the meeting was followed by a most enjoyable luncheon.