The Knights Beneficent of the Holy City (KBHC) is the anglicised name of a very old and very "elite" masonic body known worldwide as "CBCS", short for "Chevaliers Bienfaisant de La Cite Sainte".

There are several "obediences" in this Order, which do not officially recognise each other, but in England particularly, Regular Membership of CBCS was traditionally restricted to literally just a handful of the most senior Knights Templar!

However, many English masons, quite legitimately, took the step of crossing the Channel to Belgium, where membership was more easily obtainable.

Recently, in only 2007, the Grand Priory of Belgium sanctioned England to work the Degrees of the Order, forming part of the Rectified Scottish Rite, more openly, but still in a quite restricted, "Invitation Only" manner.

The Grand Priory of England is governed by the Grand Master, who is supported by a Grand Prior, a Grand Chancery and a retinue of Grand Officers who are his advisers and assist in the administration of Grand Priory, a meeting of which is convened at least once in every year.

Address by The Most Eminent and Reverend Grand Master 2017

Address by The Most Eminent and Reverend Grand Master
Michael Edward Herbert, G.C.H.C.
to the Annual Meeting of Great Priory
Thursday 14 September 2017 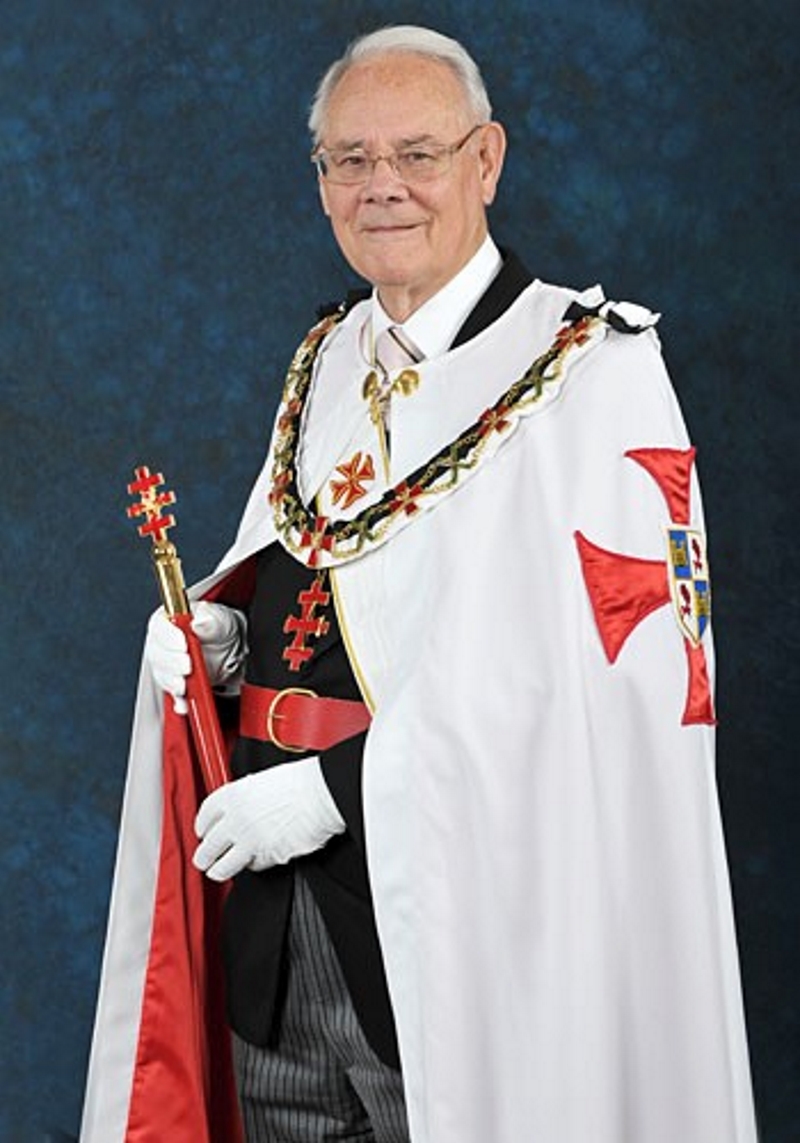 Reverend Knights, Squire Novices and Brethren, a warm welcome to you all today and I wish you a memorable and happy day. This morning we worked the Sixth Degree of the Rectified Scottish Rite, the ceremony of Armament. 17 Squire novices were created and commissioned as Knights of the Order of Knights Beneficent of the Holy City. This is the supreme Degree, above all the ranks within the Order. We congratulate all those who have merited this high distinction. This afternoon we congratulate all those who have been appointed to, or promoted in, Grand Rank.

Last year we Consecrated 5 new Scottish Master of St. Andrew Lodges and I am delighted that the Regional Grand Prefects have reported that they are all flourishing and that the original Lodges continue to inspire and attract first class Candidates.

This year we have seen major changes to our leadership. Michael Southworth and Barry Burridge have succeeded Malcolm Moreland and Keith Jackson as Regional Grand Prefects. In addition, Angus Hannagan, who has been such a tower of strength and to whom we owe a huge debt of gratitude has retired as Grand Chancellor. Ryan Williams has succeeded him in that office and we wish him many happy and prosperous years ahead.

Today we celebrate out tenth annual meeting and our first Grand Master, M.E. & Revd.Kt. Leslie Felgate Dring, who was the driving force behind the creation of our Grand Priory, would be so delighted that we have reached this landmark. At the inaugural meeting, he created four Regions and Installed four Regional Grand Prefects. Two of them, R.Revd.Kt.s Malcolm Moreland and Keith Jackson have retired today. They have led their Regions with enthusiasm and distinction. They had the task and the responsibility of starting their Regions from scratch. This they did, ensuring they were built on sure and sound foundations. They can be proud of their achievements as they pass on to their successors established thriving Regions. We thank them for their dedication and we know they will continue to give wise counsel and commitment to our Order.

Finally, I thank you all for your support and we look forward to peace and happiness in the years ahead.
God bless you all.