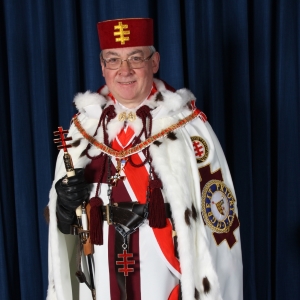 Brother Knights, first, a big thank you to all attending Great Priory today for your continued support of our wonderful Order. Your presence is most appreciated and, I know, will mean so much to those Brother Knights receiving appointments and promotions. Looking around the room, I feel we are building in strength here at Freemasons’ Hall and, happily, we still have space for expansion. So if you have enjoyed the proceedings of the day and the fellowship and camaraderie of your Brother Knights, then tell those in your Preceptories what a great day they are missing and let’s build even further on the success of this meeting.

It has undoubtedly been a meeting to remember and I have reflected on the occasion in Birmingham 13 years ago today when Malcolm Ernest Slater became our Great Seneschal and I would, once more, wish to thank Malcolm for the outstanding services he has rendered to the Order since becoming a Great Officer 24 years ago. You will have heard earlier that he will still continue to serve on the Grand Master’s Council and has agreed to undertake duties representing me when the need arises. I am so grateful to him and I know you are too.

We all wish our new Great Seneschal well in his exalted role and I look forward to working with him in the years that lie ahead.

This afternoon we have welcomed three Brother Knights to the honour and dignity of Knight Commander of the United Orders and I am sure we would wish to congratulate these Brethren also. R.E.Kt. Stewart Middleton has served as our Provincial Prior for East Anglia since 2010 and has created a happy, vibrant Province covering Norfolk, Suffolk and Cambridgeshire and I know the Knights of that Province will rejoice in his new status.

R.E.Kt. Christopher Maiden has served the Grand College of Holy Royal Arch Knight Templar Priests and Order of Holy Wisdom as Grand High Priest for the past 6 years. During that period he has orchestrated considerable expansion within the Order and has been a great promoter of Knights Templar Masonry. I wish him well as a Knight Commander.

In 1991 Great Priory celebrated 200 years of existence which was marked by several events here in London. An extraordinary meeting of Great Priory here at Freemasons’ Hall. A Gala dinner at Mark Masons’ Hall the like of which had never been seen before or has been since, a Special Meeting of the Preceptory of St George No. 6 and, a Preceptory meeting where the Installation of a Knight Templar was demonstrated according to our Ritual, to all our delegations from Sister Great Priories by R.E.Kt. Graham Frederick Redman. That Ceremony certainly left a lasting impression on me and it’s been a great pleasure for me to be able to invest him as a Knight Commander today in recognition of his many years of faithful service and his continued support.

It has also been equally a great pleasure to invest so many Brother Knights with their new ranks in Great Priory. I do hope that these appointments and promotions will inspire you to even greater services to Knight Templar Masonry and will be an encouragement to Knights in your various Preceptories to work as hard as you have done.

In September I installed R.E.Kt.Kevin Stannard for Northumberland;

And in October, R.E.Kt. Richard Thomas for Devonshire and Cornwall;

And just a few weeks R.E.Kt Karl Michel was installed for Natal and we wish him well also.

On all these occasions I have received exceptional support from my Active Great Officers and would wish to thank them all publicly for making themselves available for the various visits and Installations around the Country. One notable occasion was when the Great Sword Bearer and 6 members of the Grand Master’s Body Guard joined us for the Ceremony of Reponement of Observance Preceptory No.111 at Chennai in India, and conducted the Installation into the Order of a large number of Candidates.

Whilst talking of matters Overseas, I can tell you that your efforts in respect of the Eye Hospital in the past year have been quite exemplary and this has been a most timely increase in giving as the finances of the Hospital have been placed under considerable pressure following the withdrawal of US funding for the West Bank. We have further plans to support them from the Benevolent Fund and will keep you informed of developments on this as I know how passionate the members are to continue this level of support which began over 100 years ago with my predecessor The Duke of Connaught.

As a token of their gratitude the Hospital are sending Certificates to the Preceptories and Brother Knights who have raised these funds, also a further 3 Provinces have qualified for the large Swift and the privilege of having their names on the Tree of Hope in the Muristan Clinic Gardens in Jerusalem.

So, a big Thank you, and Well done, Brother Knights.

Before we close, I now turn to welcoming our distinguished guests from our Sister Great Priories, Rulers of other Orders and Brother Knights of our own Constitution from Overseas

We are blessed with a goodly number of delegations from Sister Great Priories so I think it would be in order for us to restrain our enthusiastic welcome until the end of the list.

Order of Knights Freemasons of Romania

From the Supreme Council 33rd Degree of the Ancient and Accepted Rite:

Now, Brother Knights, lets show our appreciation to all these distinguished Knights for supporting us today.

Province of The Transvaal

My personal thanks go to the Great Vice-Chancellor and the staff at the Chancery in St James’s Street, the Great Marshal and all who assist him, and I do make special mention of the Grand Master’s Body Guard without whom Great Priory would not be the splendid event it always is. Also to E.Kt John Vasquez and those here at Freemasons’ Hall who make us feel so welcome and assist in the smooth running of the day.

Brother Knights, let us go back to our Preceptories with grateful hearts glowing in the privilege we enjoy in being part of this Christian fraternity. Let us cultivate renewed vigour for the Holy Royal Arch which, as well as preparing us Spiritually for admission as a Knight, is the essential qualification for membership. We need to encourage our Master Masons to take the important step of becoming Royal Arch Masons in the hope that they will progress to the further commitment of becoming Knights Templar.

I thank you all for your attendance today and I wish you, your families and loved ones, well until we meet again in November.